Tajikistan is currently implementing UNDAF 2016 – 2022, which is the medium-term results framework that describes the response of the UN system to national development priorities. UNDAF describes how the UN country team will contribute to the achievement of development results based on a common country analysis and the UN comparative advantage.

The Resident Coordinator is leading and strategically positioning the United Nations country team in Tajikistan to respond to the current national priorities. The Office has five core functions:

The UN Resident Coordinator in Tajikistan

Ms. Sinanoglu was appointed as UN Resident Coordinator for Tajikistan in March 2020.

Ms. Sinanoglu brings 25 years of experience in development work, including 22 years of service to the United Nations Development Programme (UNDP). Since 2015 she served as United Nations Resident Coordinator in Bosnia and Herzegovina, concurrently serving as UNDP Resident Representative until the end of 2018 when the two functions were delinked as part of the UN Reform process.

She worked as a City Planner with the Turkish Government and in the private sector in the USA before joining the UNDP office in Turkey as a Programme Officer in 1995. 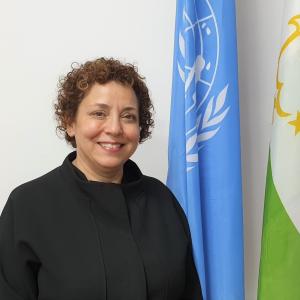